» Allotments could be key to sustainable farming
by Chilli-head 20th October 2019, 2:52 pm

I have been avidly following the progress of the peregrines nesting on Salisbury Cathedral. Some of the story has been quite dramatic as the resident female was ousted after a big fight and a new pair took over. The second egg hatched on my birthday - 16th May - and I saw the fourth egg hatching a couple of days later starting with a little leg poking out through the shell.
I've taken some still clips at various stages and have been boring entertaining friends on my gardening forum with them.
Here's Dad baby-sitting his week-old chicks 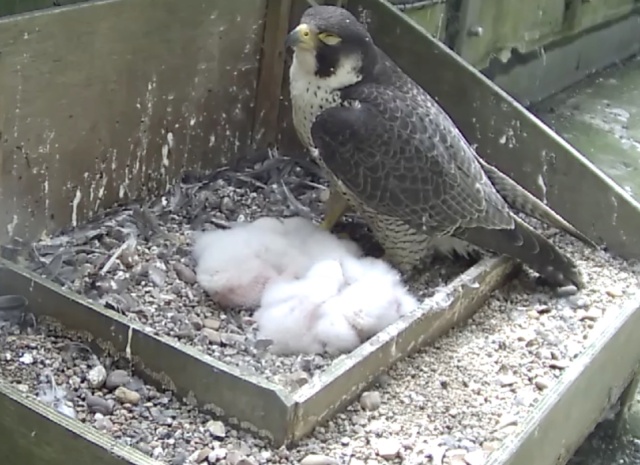 And this is two days ago when they all came back to the nest hoping for a meal - I'm guessing they could see a parent circling, or maybe they were admiring the height of the spire! Five weeks old now, should fledge next week after which they have to learn to hunt. There are three females and one male. 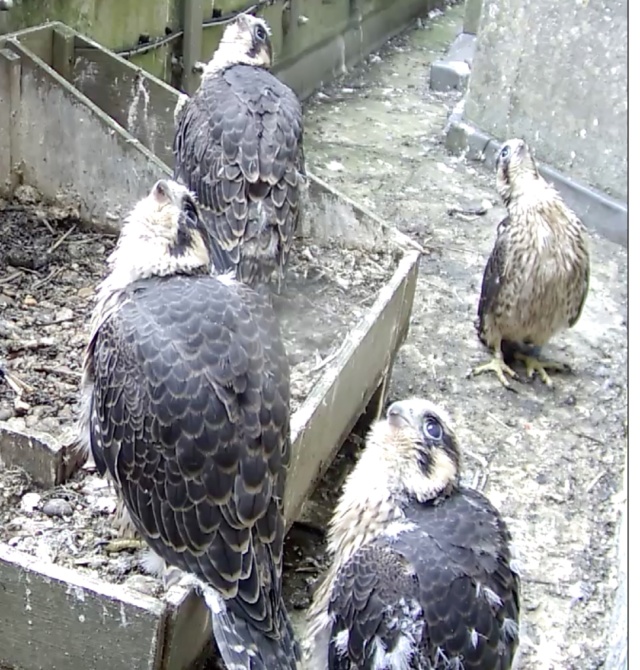 Those are brilliant - is 4 normal for peregrines?
You said they came back to the nest but haven't fledged yet, do they go for a walkabout on the roof?

Yes, Ploshkin, they go off walking round the balcony where their nest is, it's at the bottom of the spire. There are obviously several webcams so the view sometimes changes. I think four is not unusual for peregrines but it may be more uncommon for them all to get to fledging age. Two years ago only one chick hatched successfully and the RSPB were able to introduce a chick from a Shropshire nest where the parents had been poisoned.
Of course if four succeeded every year we'd soon be over-run with peregrines!

Dandelion, I should think they are a welcome predator of pigeons and I've seen many grey-feathered meals brought in. I have also identified a Rook or Crow, a Great Spotted Woodpecker and, sadly due to their increasing rarity, a Swift.

Mr Bear and I went to Salisbury today to try and see the peregrines now the chicks have fledged.

The RSPB staff and volunteers who were on duty were knowledgeable and helpful and had a couple of scopes trained on the birds that were sitting about. This was very helpful as the youngsters were well camouflaged against the stone. We saw some flying activity in the morning but mostly there were just one or two to be seen sitting quietly.They've only been flying a few days so are not that competent yet - landing being the hardest thing for them, we were told. Food is still being brought in by the parents and they have not attempted to teach hunting skills yet.

I noticed swifts flying and screaming around the cathedral too and mentioned to one of the RSPB people that I had seen one brought in as food. He reckoned it must have been ailing because the way swifts fly makes it very difficult for a peregrine to catch. It seems that the black headed gulls have taken the biggest hit - even more than pigeons.