Post Rapture comedy for those of us left behind... 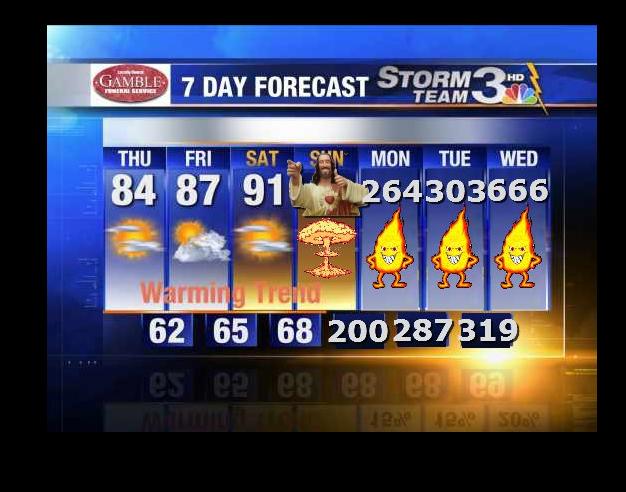 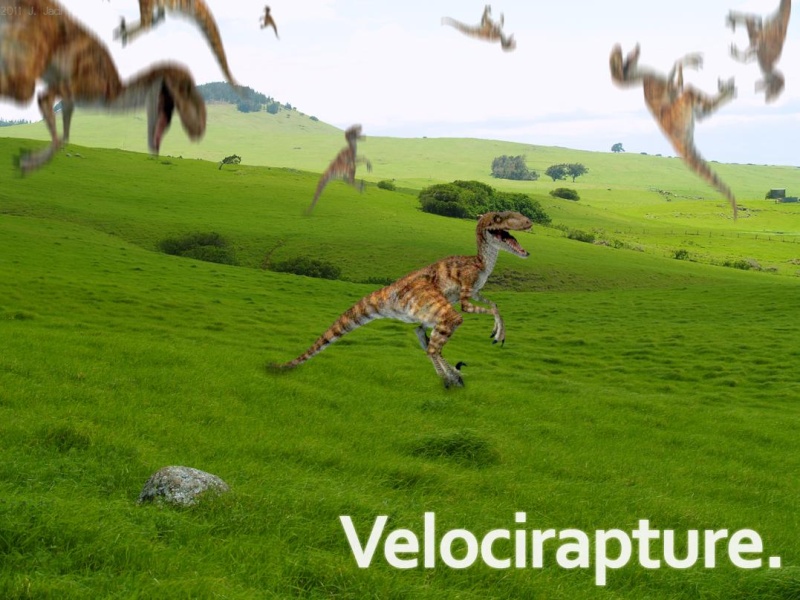 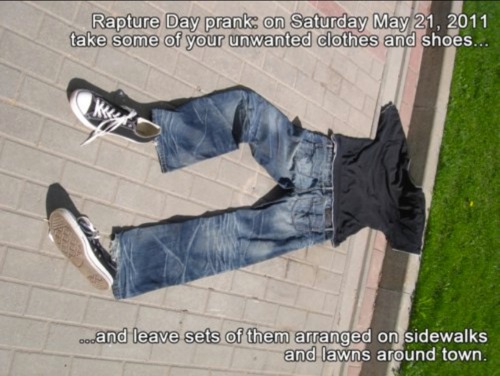 Well, at least one believer seems to have been "swept up":

Meanwhile, the evangelist at the centre of the claim, Harold Camping, has not been seen since before the deadline.
He had predicted that Jesus Christ would return to earth on Saturday.
True believers would then be swept up, or "raptured", to heaven, he had pronounced. 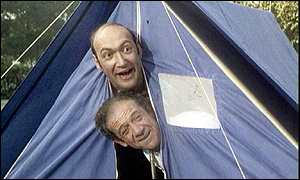 On a slightly more serious note

Apocalypse believers wait vigilantly for the end; skeptics carry on
Published On Sat May 21 2011

OAKLAND, CALIF. — They spent months warning the world of the apocalypse, some giving away earthly belongings or draining their savings accounts. And so they waited, vigilantly, on Saturday for the appointed hour to arrive.

When 6 p.m. came and went across the continental U.S. and various spots around the globe, and no extraordinary cataclysm occurred, some believers expressed confusion, while others reassured each of their faith. Still, some others took it in stride.

“I had some skepticism but I was trying to push the skepticism away because I believe in God,” said Keith Bauer — who hopped in his minivan in Maryland and drove his family 4,800 kilometres to California for the Rapture.

He started his day in the bright morning sun outside the gated Oakland headquarters of Family Radio International, whose founder, Harold Camping, has been broadcasting the apocalyptic prediction for years. “I was hoping for it because I think heaven would be a lot better than this earth.”

But he added, “It’s God who leads you, not Harold Camping.”

Bauer, a tractor-trailer driver, began the voyage west last week, figuring that if he “worked last week, I wouldn’t have gotten paid anyway, if the Rapture did happen.” After seeing the non-profit ministry’s base of operations, Bauer planned to take a day trip to the Pacific Ocean, and then start the cross-country drive back home Sunday with his wife, young son and another family relative.

The May 21 doomsday message was sent far and wide via broadcasts and websites by Camping, an 89-year-old retired civil engineer who has built a multi-million-dollar Christian media empire that publicizes his apocalyptic prediction. According to Camping, the destruction was likely to have begun its worldwide march as it became 6 p.m. in the various time zones, although some believers said Saturday the exact timing was never written in stone.

In New York’s Times Square, Robert Fitzpatrick, said he was surprised when 6 p.m. simply came and went. He had spent his own money to put up advertising about the end of the world.

“Obviously, I haven’t understood it correctly because we’re still here,” he said.

Many followers said the delay was a further test from God to persevere in their faith.

“It’s still May 21 and God’s going to bring it,” said Family Radio’s special projects coordinator Michael Garcia, who spent Saturday morning praying and drinking two last cups of coffee with his wife at home in Alameda. “When you say something and it doesn’t happen, your pride is what’s hurt. But who needs pride? God said he resists the proud and gives grace to the humble.”

At Chicago’s Millennium Park, hours before 6 p.m. arrived locally, people continued to take photographs of the famed Cloud Gate as they do every other Saturday — and poked fun at the Judgment Day prophecy.

“I guess the whole school thing was a waste of time,” said Sarah Eaton, a 19-year-old college student visiting the city from St. Paul, Minnesota.

The Internet also was alive with discussion, humorous or not, about the end of the world and its apparent failure to occur on cue. Many tweets declared Camping’s prediction a dud or shared, tongue-in-cheek, their relief at not having to do weekend chores or take a shower.

The top trends on Twitter at midday included, at No. 1, “endofworldconfessions,” followed by “myraptureplaylist.”

Camping’s radio stations, TV channels, satellite broadcasts and website are controlled from a modest building sandwiched between an auto shop and a palm reader’s business. Family Radio International’s message has been broadcast in 61 languages. He has said that his earlier apocalyptic prediction in 1994 didn’t come true because of a mathematical error.

“I’m not embarrassed about it. It was just the fact that it was premature,” he told the Associated Press last month. But this time, he said, “there is ... no possibility that it will not happen.”

Camping has preached that some 200 million people would be saved, and that those left behind would die in a series of scourges visiting Earth until the globe is consumed by a fireball on Oct. 21.

Christian leaders from across the spectrum widely dismissed the prophecy. One local church was concerned that Camping’s followers could slip into a deep depression come Sunday.

Pastor Jacob Denys of Milpitas-based Calvary Bible Church planned to wait outside the non-profit’s headquarters on Saturday afternoon, hoping to counsel believers who may be disillusioned if the Rapture does not occur.

“The cold, hard reality is going to hit them that they did this, and it was false and they basically emptied out everything to follow a false teacher,” he said. “We’re not all about doom and gloom. Our message is a message of salvation and of hope.”

As the day drew nearer, followers reported that donations grew, allowing Family Radio to spend millions on more than 5,000 billboards and 20 RVs plastered with the doomsday message. In 2009, the non-profit reported in IRS filings that it received $18.3 million in donations, and had assets of more than $104 million, including $34 million in stocks or other publicly traded securities.

Marie Exley, who helped put up apocalypse-themed billboards in Israel, Jordan and Lebanon, said the money allowed the non-profit to reach as many souls as possible.

She said she and her husband, mother and brother read the Bible and stayed close to the television news on Friday night awaiting word of an earthquake in the southern hemisphere. When that did not happen, she said fellow believers began reaching out to reassure one another of their faith.

“Some people were saying it was going to be an earthquake at that specific time in New Zealand and be a rolling judgment, but God is keeping us in our place and saying you may know the day but you don’t know the hour,” she said Saturday, speaking from Bozeman, Mont. “The day is not over, it’s just the morning, and we have to endure until the end.”

On Sunday, a magnitude 6.1 earthquake struck near a group of South Pacific islands about 600 miles off New Zealand, but there were no reports of damage or risk of tsunami. The temblor struck under the Kermadec Islands, which has no permanent population.

New Zealand, shaken by a series of quakes and aftershocks since a Feb. 22 temblor devastated the city of Christchurch and killed 181 people, sits in an area where two tectonic plates collide. More than 14,000 earthquakes are recorded in New Zealand each year.

Camping, who lives few miles from his radio station, was not home late morning Saturday.

But Sheila Doan, 65, Camping’s next-door-neighbour of 40 years, was outside gardening. She said the worldwide spotlight on his May 21 forecast has attracted far more attention than Camping’s 1994 prediction.

Doan said she is a Christian and while she respects her neighbour, she doesn’t share his views.

“I wouldn’t consider Mr. Camping a close friend and wouldn’t have him over for dinner or anything, but if he needs anything, we are there for him,” Doan said.

Dandelion wrote:'However, no-one knows the day or hour when these things will happen, not even the angels in heaven or the Son himself. Only the Father knows' Marks Gospel chapter 13 verse 32.
Maybe not a verse Mr Camping has preached on?

I guess his reading matter would be heavily Old Testament, plus the book of Revelations in the NT.

Can't see him reading the NT bits about love and forgiveness, somehow?

After all this chat in the papers etc, I have decided if God or whoever wants to end the world, I really do not want any warning, as it would not make a lot of difference anyway.

Apparently he has now decided that he got the date wrong, and has pushed it forward to October.

Badger wrote:Two days after my 42nd, I'd better have a party this year then..