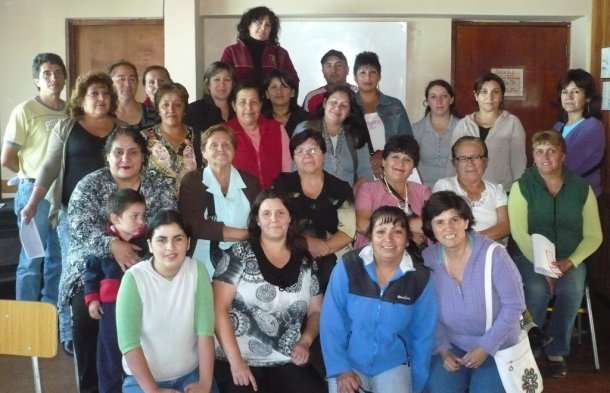 This communal bank is called “Proyectando un Sueño” (Designing a Dream) and it’s composed of 25 entrepreneurs who are in a variety of lines of work. Among them are sales of used and new clothes, grocery sales, leather crafts, food preparation, among others. They all are from the Padre de las Casas Commune.

Jessica is communal bank group president and in the photo is seated in the second row, third from right to left. She’s wearing a short-sleeve pink shirt; her hair is short and its color is black.

She’s been doing crafts for ten years. Specifically, she knits with sheep’s wool yarn. Among her products are socks, caps and vests. She comments that she learned the occupation from a course the local municipality taught. She comments that some days of the week she sets herself up in a crafts fair and the rest of the days she sells in a more personalized way to acquaintances nearby.

She buys her materials directly from people who work shearing sheep in the countryside. She will use the loan to buy sheep’s wool yarn. One of her business goals is to get ahead so that she can open a stand-alone store.

Jessica lives with her husband and one of her two daughters who attends school. One of her dreams is to teach the occupation to determined people who might want to venture into it. She’s very happy and grateful for the opportunity Fondo Esperanza is giving her because it will allow her to invest in her business.

She comments that her job as a communal bank group leader has been a very enriching experience for her personal development; her group has facilitated her tenure in office by being united and committed.

I hope they do well.