As is traditional, it was tipping with rain as I headed to the Bodger's ball on Friday, this time somewhere near Sherwood forest.  Fortunately it did stop for the weekend proper, and the sun even poked out occcasionally.

As usual the craft competion drew some great chairs: 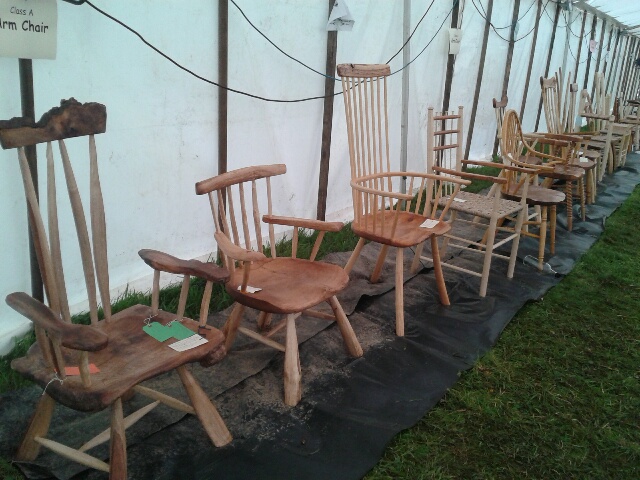 The special class for an item with some recycled component was interesting.  My vase didn't hit the spot; its fishtank heater tube liner was not prominent enough a feature to catch the eye of the voters;  I particularly liked the coathooks made from old organ stops, and the fish scaler made from old beer bottle tops: 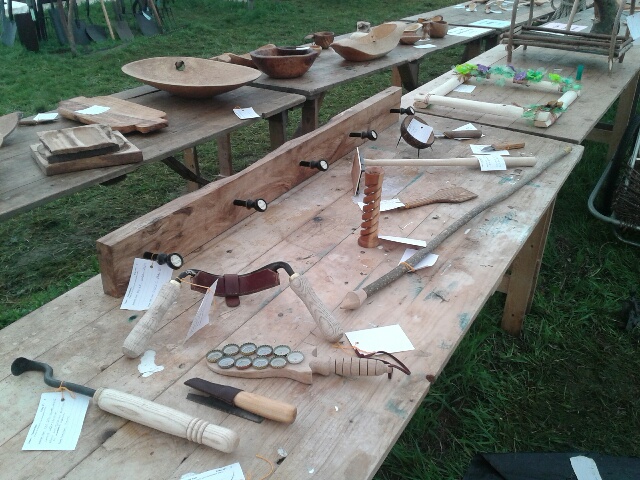 The thing somewhere behind my vase is indeed a greenwood selfie stick ...

The mug tree I entered in the turned treen category didn't excite either, but not all was lost.  I had not had time to make anything spcially for the tool category, so entered my bow saw:

I made it quite a while ago, but didn't enter last year because you can only enter one item per category.  A bit of a polish and it looked smart again - smart enough to get me the 1st prize 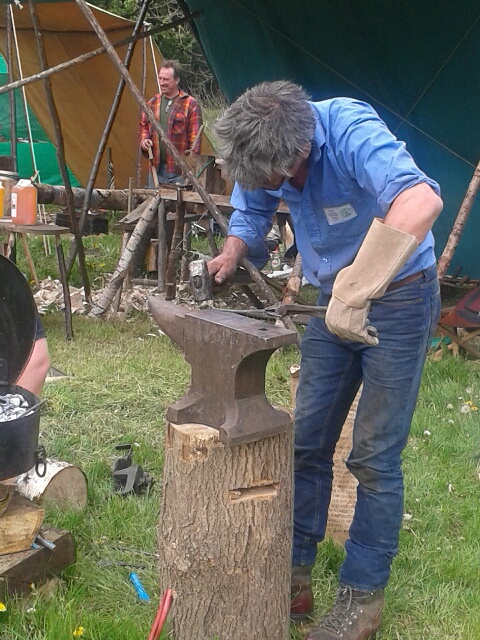 For the 30 minute challenge - make an item that could be sold at a craft fair in 30 minutes - Simon, who just happened to have a portable forge and an anvil in his van (

) made one of his ram's head hooks.  I thought it might be a problem that it wasn't terribly wooden, but apparently it doesn't specify that in the rules, and so he got a second prize.

To keep us entertained a roaming Green man joined us on Saturday, and spent the day wandering around entertaining kids and adults with stories, flute and bagpipes.  Later in the evening he turned out to be quite a bard and entertained with song and verse. 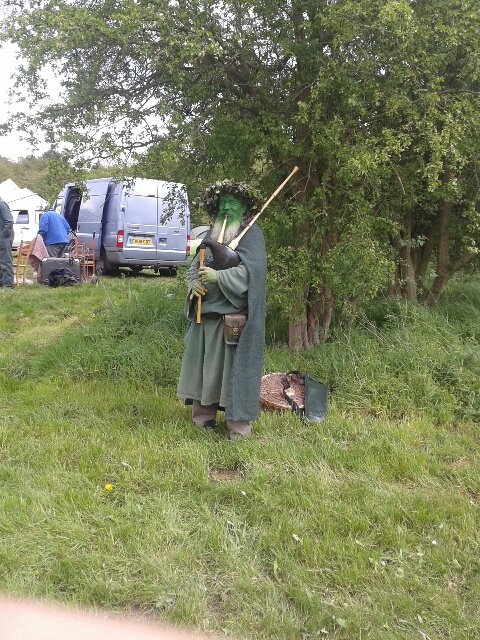 Your bow saw deserved a first - well done.
It's good to see what appears to be a good number of entries, bodging is clearly popular.

Now I have said in the past that one of the nice things for me about going to the bodgers ball is that, for one weekend at least, you can feel completely normal. Just found this video on Vimeo of some of the stranger goings on on at the last gathering near Nottingham. I was helping on the bar for a short while, and the barmaid had known the Green Man since she was a child, but could only recognise him in his makeup !

Can anyone become a green man or is it an inherited / earned/ qualified for / applied for position. I presume there is only one at an event.

It brought back a memory of 'greening up' to play the part of a ghost in a school play (the ghost of Helen Keller's brother). My appearances were in a green light so apparently I looked white. The green came off ok but I'm sure I oozed green out of my pores afterwards when I got hot.

Ploshkin wrote:Can anyone become a green man or is it an inherited / earned/ qualified for / applied for position.  I presume there is only one at an event.

I don't imagine one needs a formal qualification, but this particular chap is rather special, I think. He has a perfect range of entertainment talents - I saw him play flute, bodhran, singing and storytelling. I have seen his picture on adverts for other events in the Notts area, so I think there can't be many competing Green Men. I did see a Green Man in Oxford on May morning many years, but he was a rather different sort; he was more or less encased in woven willow, and did not perform much, but accompanied the Morris dancers.