I had an angry moment yesterday.

My son's phone, a just over 2 year old Samsung, doesn't hold charge anymore. Easy, new battery needed I think. Look on Samsung's website - lots of advice on the importance of using a genuine battery because low quality fakes have been known to overheat, rupture or catch fire, whereas genuine Samsung ones never do that

. Link to the e-shop is a 404. A search of their e-shop shows nothing - few replacement batteries of any sort. They would obviously rather I throw the phone out and get a new one. Indeed, the latest phones don't have a replaceable battery.

A search shows up lots of "Genuine Samsung" batteries on Amazon - at a price means they can't possibly be genuine, with comments to confirm it - poor performance, rupture, fires ... Why do Amazon not feel any need to clamp down on this ? There is, of course, the odd more expensive battery on Amazon, but is that because it is real, or is it another fake one just making more profit for some crook ? How are we supposed to know ?

This strikes me as a terrible situation. Smartphones are obviously designed to last out a 2 year contract, then be binned. Now most throw-away culture is confined to relatively wealthy countries, but mobile phones are popular worldwide, especially in countries with poor landline infrastructure. How many million, if not billion, phones are we to discard on a 2 year cycle ? And the last I knew, LCD screens were not recyclable - too hazardous to do manually, no machine yet devised to do mechanically.

Sorry, had to have a rant. Angry E-mail sent to Samsung.

Rant away C-H. I agree with every word you say.

I have LMJ's old smart phone, otherwise I probably wouldn't have got one. I try to conserve battery, but it can run down in a day. On the other hand, I think it always did the amount LMJ used it at times!

Ahh, we are now in the realms of the EU WEEE directive.  Since 2002 the EU has been trying to get this right.  Essentially electronic equipment manufacturers became responsible for disposal of waste electrical and electronic equipment.  There are a couple of ways of doing that, either you take it back directly (for non-consumer products this is the norm) or you join a compliance scheme, through which you contribute to cost of municipal WEEE collection in proportion to how much you produce.

That's great, and covers how to collect the waste equipment, but what actually happens to it ?  Well, neither Apple or little companies (like mine) are in the business of recycling old electronics, so we'd pay someone to take it away, where it joins the stuff from the skip at the Tidy Tip, and presumably changes hands from one company to another until it most likely gets packed into an otherwise empty shipping container making its return journey to Africa, India or China,  where safely out of reach of EU legislation, health and safety rules it will be "recycled" in a place looking probably a bit like this: 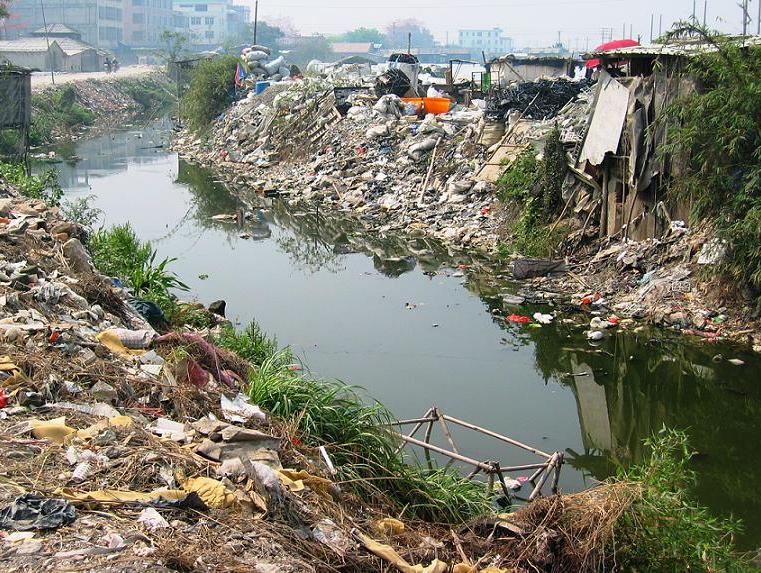 Wikipedia wrote:
The overall aim is for the EU to recycle at least 2% of electrical and electronics waste equipment by 2016.

And that is why I believe it should not be permitted for manufacturers to make electrical equipment designed to last only 2 years.

I'm probably very naive, but I don't understand why any manufacturers of anything shouldn't be responsible for the safe and ethical disposal of their own products. The thing that I find so utterly depressing is the mountains and mountains of cheap plastic tat that fills up department stores, toy shops, pound shops, discount shops.......

In a similar vein, but about ownership rather than production .... my man was given a brand new industrial vacuum cleaner, which he later decided he had no use for. His answer, as he wanted the space in the garage, was to take it to the tip!! He didn't get the chance - I was incensed and insisted he find some way to dispose of it responsibly. We had decided that it would go to a charity shop, but before I had the chance to take it, he decided he did want it after all. The whole episode really clarified for me that if we accept something, anything, it then becomes our responsibility to make best use of it, or pass it on to someone who can. Just because it cost us nothing doesn't absolve us of the responsibility for dealing with its disposal.

The idea that all manufacturers should be responsible for their product end of life disposal is a nice one in principle. I can see a couple of problems though. One is that, for a lot of stuff - especially the easier to recycle things from easily separated materials, collecting them in bulk is probably more efficient and reduces overall mileage - think tin cans, bottles etc, but it probably extends to all manner of metal, plastic and glass things.

The other issue is that 'being responsible for' doesn't in practice necessarily lead to ethical disposal, as we see with electronic goods. The intimate mix of materials can't be separated without very special methods, and so although the manufacturer might take stuff back, it has to go to a specialist recycler - unfortunately when you pay a seemingly reputable waste handler to take it away, you can never be sure that everyone in the chain will behave ethically - not just dump it in somewhere out of sight, out of mind like Guiyu.

I would argue - certainly in the case of poundland tut and electronic devices designed to last only a couple of years before failing irreparably - some things never should be allowed to be brought to the market in the first place.

Chilli-head wrote:
I would argue - certainly in the case of poundland tut and electronic devices designed to last only a couple of years before failing irreparably - some things never should be allowed to be brought to the market in the first place.

Well yes, I think although I didn't say it, that was behind my own thoughts too. Maybe making products that are at least repairable would help. Last time I bought shoes, that was a major consideration for me. I just try to do what I can, and make things last as long as possible.