Exercise in the April garden

Oh heck Flobear, i curse the day i laid old (nylon) carpet in the plot that was destined for my beehives. It got left (not the original intention) and now acts a perfect root run for nettles.

I am deeply disappointed that I have virtually no blossom on my crab apple tree this year. Usually it's so covered that I can't see the leaves and is beautiful. I was delighted, in February, to regularly see a pair of female bullfinches in the tree (pecking at the branches). I now think their motives were sinister! I didn't think that there were any buds on the tree then for them to damage but if that is the reason for lack of blossom they've done a good job.

Carpet - yes exactly - that's why I said what I did about permanent weed suppressant barriers.

Oh no Ploshkin, the little stinkers. I saw bullfinches a few times in my front garden, but not in the back where my young fruit trees are. I think (and time will tell) that I've lost my pear blossom to the frost this year. Not that there was much as I've had the trees only 2 years. So the lesson for me is to protect the trees at the outset of winter, which should solve both Bullfinch and frost problems - so long as I remember to let the pollinators in to do their job in Spring!

Trouble is, my crab apple is a mature tree so impossible to protect.
The only thing that might help is not to put bird feeders on that tree. The bullfinches weren't the least bit interested in the feeders but may have been attracted to the tree by the other birds on the feeders.

Some beetroot seed I ordered in March arrived in the post today. I ordered them through Amazon without noticing they were coming from France, feel a bit guilty for causing the bother really. They are a heirloom variety which I've not tried before, so hopefully I'll get chance to sow them before it is too late. Bit hot for things at the moment over here. I'll need to water today.

Have you seen the bullfinches in previous years Ploshkin, or are they newcomers?

I've seen a single male bullfinch on two or three separate occasions in the last 5 years or so Dandelion but this pair made several appearances in the crab apple tree in Feb and March this year.

Oh that's bad luck Dandelion. I didn't know hydrangeas could do that. Think I would be considering glyphosate on the new growth - the root remains may just be small enough to succumb.

More digging and weeding. A little bit of good news - my asparagus still lives ! There was no sign of it a few days ago, now it is back.

I reckon one more session and I'll have this worst bed clear. The others look much easier. It will be nice to get back to sowing something.

Ooh, good news about the sparrow grass CH. Mine is sprouting already - it was only planted a couple of weeks ago. No pickings for us this year though, and probably only a little next year.

My 2 apple trees arrived today. I'm having a go at stepovers in the fruitcage. That's what happens when you're waiting for a ewe to lamb at 2 am and googling stuff to pass the time!

I'm back in my own garden now.  Tomatoes have grown a bit since I went to Dad's.   And the chillies - I'm excited about my 7 pot yellow plants.  Well hot, allegedly.

So, I will be needing to pot them up.  I have New Horizons compost, which seems not to be the same  two years running.  This year it has more grit, and seemingly less nutrients.   The only thing consistent about it is that the bag size is smaller than last years !

So, other approach called for.  Can I be immodest about my compost for a moment ?  Really happy with my result this year.  Because of the lack of manure this spring for potato planting,  I dug out some of my rather rough compost from the kitchen garden heap, which has been added to over the winter, so a fairly cold jeap, but ok for a potato trench.  Worried
I might not have enough for my tomatoes, I turned the heap, and mixed in shredded garden waste, some collected from neighbours (who thought I was doing them a favour !), kitchen waste,  and a lot of cardboard packaging.   My empty wine cases account for quite a lot

, but we get a fair amount at work too.  It hotted up nicely,  and the result after just another month is amazing.  I dug about 500L out today, which will make a good potting mix with the 100L bag of vermiculite I got in before the craziness started.

Tomorrow I plan to take a break from working from home to head to the lotty to sow carrots.  Last job on the April list.

The carrots are still not in, but I have the lotty digging and weeding 3/4 finished. Looking much better, but heaven knows how I woukd have got on top of it this year without skiving off work at 3:30 to do some digging !

Fruit is looking promising - lots of apple and pear blossom, and flowers on gooseberry, blackcurrants, raspberries and strawberries.

Talking of soft fruit blossom - one advantage to a small garden is that I can see my fruit cage area from my bedroom window. I hadn't worried about putting the top roof net onto the fruit cage, intending to do it just before the fruit started ripening. A couple of days ago, I watched a blackbird in the cage jumping and pecking at the gooseberry and blackcurrant bushes. Ran off the fetch my binoculars for a closer look, and yes, the little bugger was jumping up and pulling the only-just-forming fruits from the bush! The net roof was on within the hour!!

I love the blackbirds but they can try one's patience!
Mr P and I put the roof netting on my new fruit cage yesterday. Oh, what fun. The assembly instructions said that the corner of the net was marked with white twine and the long edge with green twine. Mine had no twine of any hue!
3 wettish days have been very welcome (I couldn't have imagined saying that during the 7 months of continuous rain up until the end of March.). The garden was in need and my 1000 litre IBC that holds rainwater for the polytunnel was on the point of running dry.

This is my fruit cage before the roof went on. It's 4.5m x 4.00m and is sited where I previously had raised beds for veg growing so the soil is pretty good.

Knowing me I have probably put too much in it, too close together! It contains 3 blueberries one of which was dug up and transplanted, 2 lingonberries, 2 blackcurrants that were naturally rooted bits from my 20 year old Wellington xxx, one new redcurrant, 2 green gooseberries that I am growing as cordons (I am gong to get another two red ones) and a fig in a pot.
The short stakes each side of the path are for stepover apples. When I took the picture I hadn't put the wires on or planted the apples which I have now. They are a James Greave and a Worcester. I don't have much joy with apples here but I thought I would give them a go.
I do have an apple tree (Scrumptious) that is about 10 years old and has rarely produced anything but the very few apples I have had were delicious. So, I got my neighbour, when he was doing a job here with his JCB the other day, to dig it up and I have transplanted it in my polytunnel plot which is in full sun (when we get sun). It had gone very leaning and misshapen so I pruned it severely. Because the soil was very dry it lifted with the roots largely undamaged. If it fails I won't really have lost anything but if it succeeds I will be happy[img] 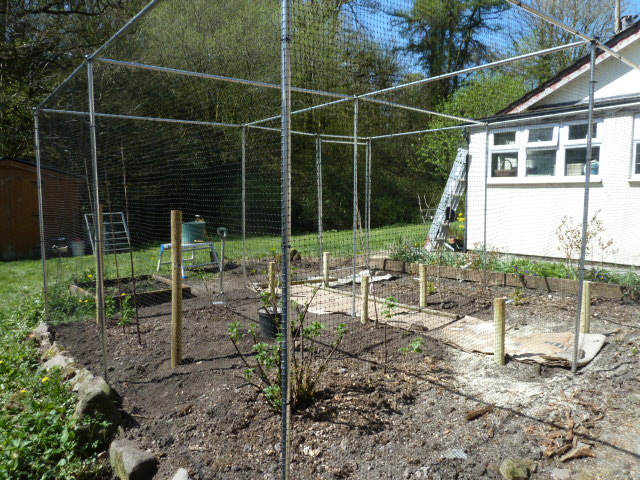 My fruit cage is 4m long, I think, but more importantly, narrower than Ploshkin's. When the fruit bushes got going it was / still is very difficult to get around inside the cage especially up the gooseberry end!

I suspect mine is going to be overcrowded too. Not as big as Ploshkin's, but additionally, because of having to level the sloping ground, the back long side of the cage is pretty much down to the rock layer, so not plantable. I have my strawberry containers lined up along there, but it meant having to push the bushes closer to each other than I wanted, just to give them enough soil depth.

I thought doing the gooseberries as single cordons should help with the space issue. My previous gooseberry bush, though productive, got very unruly and it was hard to pick the fruit. Ive already found one advantage of cordons - I was able to spot the sawfly attack as soon as it started.

Unruly is the very word to describe my gooseberry bushes!