Thought I would post up a link to my blog post on this, part of a series of "how to" posts I made last year. If want the full article, or to read the comment discussion you will have to read the blog post.

Raising plants to transplant outdoors (or under cloches or in a greenhouse/ tunnel) gives you a head start on the season. It is simple to provide extra warmth for a few pots and trays of seeds - in a warm room, or on a heated bench for example.

But remember - the seedlings that appear will also need some warmth and good light levels, until they can be moved to a frost free final position, so allow for where you are going to keep them. This is especially the case with pepper, tomato and aubergine plants as they will need a warm place to live!

I have had a lot of success with putting moderate sized tomato plants inside a cold frame inside an unheated polytunnel during April and this would work just as well inside a conservatory or a plastic small greenhouse I think.

I have recently been sowing tomatoes, sweet peppers and aubergine (egg plant for US friends) seeds in modules which have been germinating in my heated propagators in the porch. The porch is double glazed but unheated so can get cold at night! It is west facing though so gets the sun in the afternoon and makes a good place to set up "mission control" seed growing central! 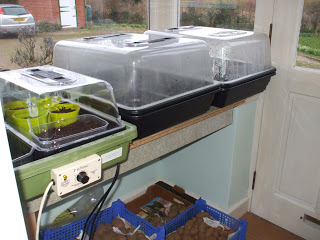 I now have 3 electric heated propagators, each of which will hold 4 of the 6 celled seed modules. I have slowly gathered these over the last 20 years, they ARE expensive and I had two as gifts and the third was a sale bargain as it had a slightly damaged lid (!) BUT they are invaluable to me to help raise early plants, as I do not (YET) have a greenhouse to do this in.

I sow the sweet peppers and aubergine seeds first as they take longer to germinate than tomatoes (the peppers especially) I usually can move the seedlings out of the heated propagators and into unheated mini greenhouse trays after 10 days or so, and then I can sow more seeds in modules and put them in the empty space in the propagator...

I also sow herbs and salad seeds in unheated mini greenhouse windowsill trays and they give me an early start to the summer salads!

I do have salads over winter in the polytunnel BUT we don't tend to want to eat much salad in the winter in our household! 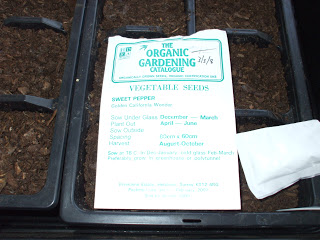 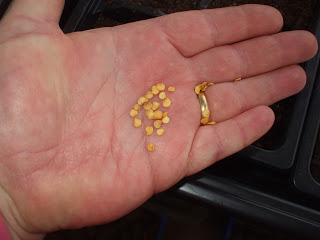 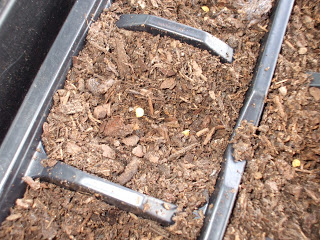 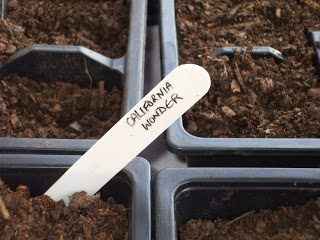 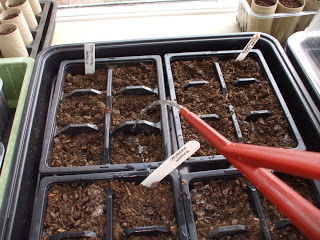 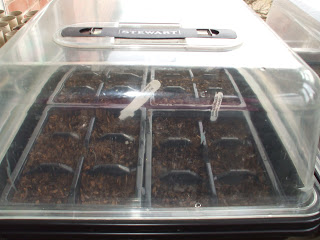 and place in heated propagator,

seed germinated in 9 days...if in unheated propagator ( tray with some sort of cover) it will take longer...) 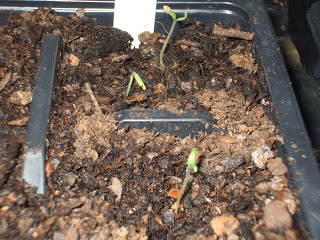 I have been sowing recently inside in my heated propagator in the same way as the pepper seeds, tomato, hot pepper and aubergine (egg plant)seeds.

I measured the temp in various places in the propagator, the inside base of the box is at 36 centigrade, the soil temperature at the bottom of a pot is 28 centigrade and the air temp above the soil is 24 centigrade...

so that should help anyone who wants to make something up for themselves.

Tomatoes/Peppers/Aubergines - for growing on in a cold greenhouse or tunnel
during the March waxing moon.

I would love to read about how other people grow their seeds?

If you do something differently, please post it up.

Do you use a heated propgator Pol? or have them in a warm room inside?

Is your greenhouse heated at all?

No propagator, no heated greenhouse, just on the window ledge.
Pol

I would love it if you could let us know how the seeds germinate, how long they take, what you do etc, as it would be of interest to others.

We all grow in many different ways!

I have a small heated propagator which is parked on the guinea pigs' cage in a north facing porch at chest height (so out of the worst of the draughts) The porch has a plastic roof, so although it doesn't get the sun until the spring, it is a constant light. I then have to see what the weather/temperature are like and play it by ear - i don't have a green house or polytunnel, but i do have something we refer to as 'the little greenhousy thingy' - a sort of cupboard with polycarbonate plastic. This is Ok as long as there aren't any hard frosts (in which case the plants come into watch TV with us overnight!) I try and get them outside ASAP, but have got caught out before by damage from a cold wind rather than frost.

I have a W facing double glazed porch which is great, I use heated propgators and then transfer plants to the polytunnel, inside cloches...which seems to work even for quite cold spells in March...

I have a greenhouse, its in bits, it has been like that for 8 years now...perhaps 2010 will bethe year we dig out the foundations and finally put it up?

Germination is reasonably good, bearing in mind I often use old seed. Peas & beans I start on paper towels & if they start I then put them in the aformentioned bog rolls. Flower seed in bog rolls & then planted to the pot I want them in. Other veg whichever way is convenient at the time. All I do is keep them moist. Sometimes I just treat them like sprouting seeds.
pol

My seeds went on the kitchen window ledge and some of them have come up very nicely.
I've also put some broad beans in roll holders and I was going to put some more into the ground today But it started to rain yet again.
Nevermind there is always tomorrow.

I don't know why more people don't pre sprout seeds before they put them in the soil, with Parsnips especially its a good way to see if the seed is still viable

I have found larger seeds like being in the dark ( airing cupboards are good) to get them sprouting..think about how much light your sed would get in the soil, if it is bigger it will be buried further and so probably need less light, if small seed it doesn't seem to matter tbh ( like cress)

I can remember when I was at infants school, the teacher grew runner bean seeds, and she put them in a jar with blotting paper in the cupboard to sprout (next to the lukewarm bottles of school milk - yuk) Will try that with the broad beans - in the airing cupboard with the undies!

Can I talk compost ? I'm interested to know what people use as a growing medium, especially for toms and peppers. I grow them in 3 gallon containers with the bottoms cut out, on a bed of sand. I've used various peat free composts including some rather woody and not too successful stuff from B&Q, New Horizons, and some home formulations - peat (I know, but I scrounged it on the way to a skip) with sharp sand and seaweed meal, and home made compost/sharp sand. So far I've not managed to do better than the New Horizons, but I like the idea of mixing my own. They were discussing this on Gardeners question time at the weekend, and the panel all seemed to recommend a loam based mix. What works for you ?

I use my own compost to grow on my plants, with a small top dressing of Fertile Fibre SA certified growing medium.

My compost bins take a small amount of soil on the roots of things and I use it in builders buckets as plant pots, standing in gravel trays (3 to a tray, one plant in each bucket, holes drilled in the base)

Everything in the PT grown beautifully with this system, despite it being neat compost effectively.

The seeds themselves are sown/grown in Fertile Fibre seed growing medium.

I have stopped using New Horizons because it is made from HWS green waste and HWS wood skip waste ( including chipboard, kitchen work tops etc!) and I didn't like the idea of the formaldehyde OR the ( addmittedly very small) possible risk of Aminopyralid comtamination from the green waste....

I feed with SA certified liquid tomato feed, seaweed meal and a very smelly home brew of nettles and comfrey. I also top dress with a bit of wood ash as needed.

Thats what I do.

Hmm. I have to say that I know what you mean; I do worry a bit about what goes into these "recycled" composts. I know that New Horizons has waste from kitchen unit manufacture in it (you can see odd chips of formica !) -they say that the glues etc decompose quite quickly in the composting process, but still ...

Anyway CW, you have inspired me to have another go with home made compost. I've dug out a compost heap, and sieved the good stuff from the bottom. Looks good, but It seems a bit sticky, so maybe some grit to improve drainage and some seaweed meal. I haven't enough for all the indoor stuff this year - mulching the asparagus has to take priority to keep the OH happy - but I'm thinking of a trial; New Horizons-vs-homemade, and see what happens.

I did that a couple of years back and the home made produced better growth and more, sooner, larger fruits. I mainly did it with tomatos, but the few peppers and aubergines I did it with also had the same result.

I did a back to back comparison, same seeds in same seed medium grown under same conditions, just planted out the plants into the different growing media. They had the same treatment after that...

There are pics on my blog somewhere, when I am feeling a bit better I will look them out .

Glad to have inspired you, Chilli Head!

If anyone is interested I have the data sheets from the manufacturer ( Scotts) relating to New Horizons...I am guessing other, similar growing media are produced in much the same way.

Also bear in mind the word "Organic2 on any of the growing media, or farmyard manure etc means absolutely nothing...

Unless there is a recognised certification mark ( SA, OFand G etc...) the word means nothing on gardening stuff.....

I would be interested in seeing the data sheets when you're up to it - I bought New Horizons because I'd heard that Which magazine had rated it highly for germination rates. I hadn't realised that it might be full of wood skip waste. Doh!!

Danelion I have emailed you the spec.

If anyone else is interested pm me your email and I will forward it to you...