The last time I saw ladybirds in any numbers was about 15 years ago when we had an infestation on one of our fields. There were tens of thousands and they (or their larvae) completely wrecked the grass which had been shut out for silage.

Ploshkin wrote:The last time I saw ladybirds in any numbers was about 15 years ago when we had an infestation on one of our fields.  There were tens of thousands and they (or their larvae) completely wrecked the grass which had been shut out for silage.

It's not what you expect from our favourite national insect - it sounds more like locusts than ladybirds! I suppose any insect en masse is a bad thing.

I recall saying a while back that we had sighted 2 barn owls and were hoping for the patter of tiny claws in our shed roof. Well, from my nightly listening I know that we have had a happy event and that there are at least 2 owlets.
I'm really chuffed because last night, after quite a few attempts, I got some video clips with a camera trap. In one of them you can see that the owl has a dead mouse or rat in its beak and it flies up to where the nest is.

I'm getting a number of video clips every night of the barn owls. They seem to be hunting very well. I can only put the camera at one end of the void so I move it to the other end every few days. Whichever end it is it catches 3 or 4 rodents being taken in to the nest. It's not always possible to see but a lot of them are short tailed voles which I know are the favoured prey of barn owls.
Video clips are too big to load so I have saved a couple of frames.
[img] 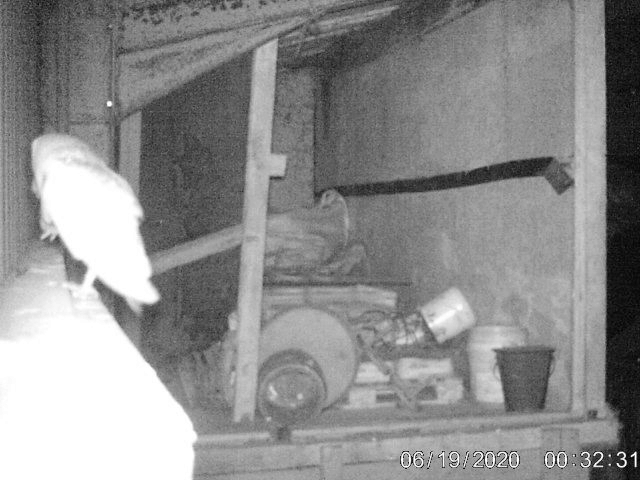 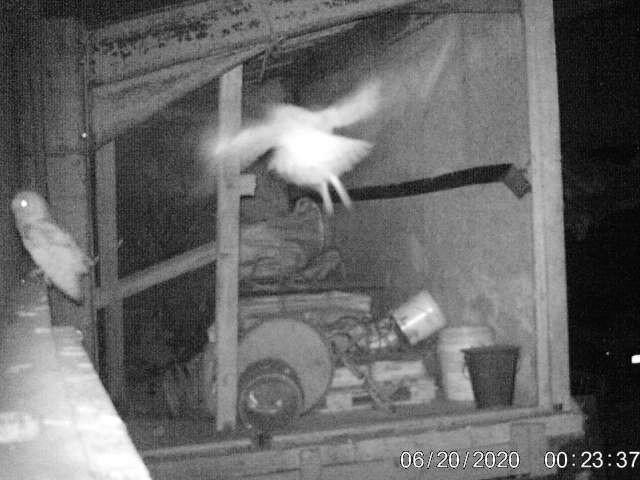 I'm so thrilled.  My camera picked up the babies in the early hours - 3 of them lined up in the gap, bobbing their heads up and down then just at the very end of the clip a fourth appeared.
Unfortunately, the timer was set until 5.00am and that was the final clip.  I've extended the time for tonight.  It very much appeared that they were getting ready to fly.
The last few nights I have seen the adults taking in up to 11 voles and mice each night, mostly between midnight and 2.00am.

That's exciting Ploshkin - hope you can see them flying

Oh wow! Your very own Barn Owl babies. I am suitably envious. These trail cameras are remarkable things, aren't they?

We now have three ex-commmercial hens (I can't remember if I mentioned this in another thread.) That in itself is another story, but they have arrived badly pecked and a bit featherless, but also (understandably) not very happy about being handled. To get them sprayed with anti-pecking spray I have been taking them out of the nest at night while they are sleepy. And while Mr D and I were creeping around the garden at night by the light of a torch, we saw our resident hedgehog! We haven't seen it out and about - we discovered it asleep in its nest in the spring but didn't know if being disturbed had had a detrimental effect. But there it was, snuffling around by the hens' cage! We have now put out a bowl of water for it at night.

That's lovely Dandelion, I haven't seen a hedgehog at all this year though my neighbour has a regular visitor so it's nice to know they're around.

I've been meaning to post these for ages. My 4 barn owl babies successfully fledged and I really miss them now as I had been following their every noise and movement for 5 months. They're still around, I hear the young ones screeching in the trees and there's plenty of new poo in the shed every morning but they are no longer consistent in their behaviour and it's pot luck if I catch them on camera.

Here are 3 video clips from a couple of weeks ago.
They are 60 seconds long but the first one freezes at 30 seconds - I think the battery was low

They're terrific bits of footage. The head-bobbing is hilarious!

I've just been watching a bee on my stachys (lambs ear) plant. I wondered what on earth it was doing as the plant isn't flowering. It was on the underside of the leaf, scrabbling its front legs furiously - then I saw it was gathering the soft downy material and it flew off with a ball the size of a large pea.

How lovely, freebird. I wonder what they do with it.

Can't think what they would do with it. Was it a solitary bee species as opposed to a bumble or honeybee? They have very varied nesting habits.
My very welcome guests are pretty resident now. Our barn owls have reared 4 chicks again this year, 2 of which have recently fledged. I had a face to face encounter (socially distanced of course) with one the other day. It was poking its head out watching me when I was going up a ladder in the shed. They are such exquisitely beautiful creatures.

I have since found out that my bee was a wool carder bee. The females gather the soft hairs of plants such as stachys to make nests.

Ah, I've heard of them but didn't know why they were called that. I'll have to keep an eye on my stachys now.

One of these chaps showed up in our garden, in the hot sun, during the day, a few days ago.  The girl next door found a matching one in their garden.  Then 2 more showed up.  Mum might still be around, but she doesn't seem to be able to look after them, and they are too small for the big wide world without help.  They are currently with next door, who are better with animals than me (I couldn't even keep fish alive for long) and being fed up on cat food.  They take them out in the garden in the evening in case mum or any siblings might come to join them. They are about 80-100g each. Aside from small, they seem healthy. 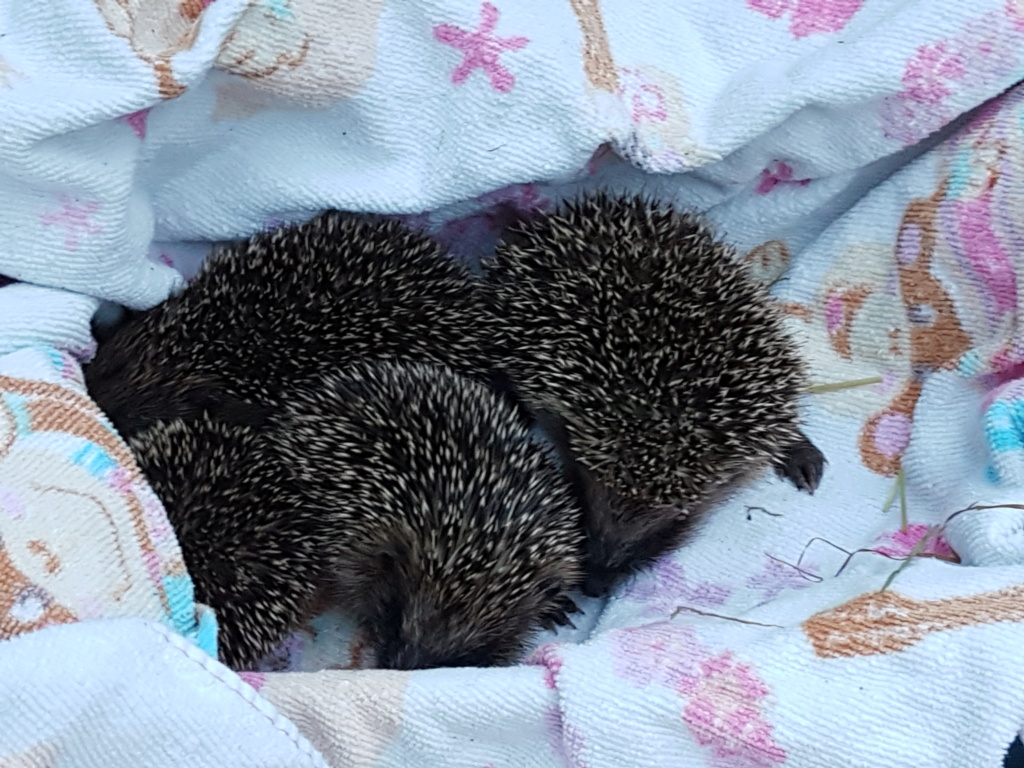 They look in good shape. If your neighbour hasn't come across it hedgehogrescue.org.uk is really good with dos and don'ts and how to take care of them.

My welcome guests are the swifts who treat me to a Red-Arrows-style display every so often. You can hear them incoming - not for nothing are they known in the Forest as Screamers - and they swoop around and away then come back in twos or threes, disappear out of sight, re-form and come round again. Have only had about a dozen in one go; when we were at a friend's house for a bbq there were 20 or so displaying over the garden.

Oh, lucky you Flobear. I had never seen a swift until last year when I was in town and heard a screaming noise and looked up to see swifts flying. I have been on the lookout for them again this year and have sighted them twice in the same street as I saw them last year.
My own welcome guests are probably classed as residents now. Our barn owls are nesting in the roof of the sheep shed again. They definitely have 2 chicks but I think there may be a third, smaller one.

We are on hoglet duty this weekend as the girls next door are off camping. The hoggies seem pretty well and vigorous, the biggest is 280g now so almost ready to venture forth. I was thinking to water the compost heap and cover it with cardboard - it should produce a good harvest of slugs for them on the underside to mske a change from cat food.

That's really good to hear that they are doing well Chilli Head.
Our barn owls have 3 confirmed chicks, I think 2 are nearly ready to fledge. They seem to have been very quiet this year but I do sometimes hear line dancing up in the shed roof first thing in the morning.

Dinner time.  The forth one is a little shy on eating, we made sure (s)he got their fill later.

We are on duty at the moment as the girls next door are off camping.

Oh, Chilli Head, they are delightful. They look to be in good health. Your neighbours and you are doing a great job.