» What arts and craft things have you been making lately?
by freebird Yesterday at 10:40 pm

A Homemade Life :: The Home and Family :: We love wood.

last few bricks in place.  The curvature is tighter here, so they needed cutting to shape. Former removed after a couple of days setting - and it stands self supported ! 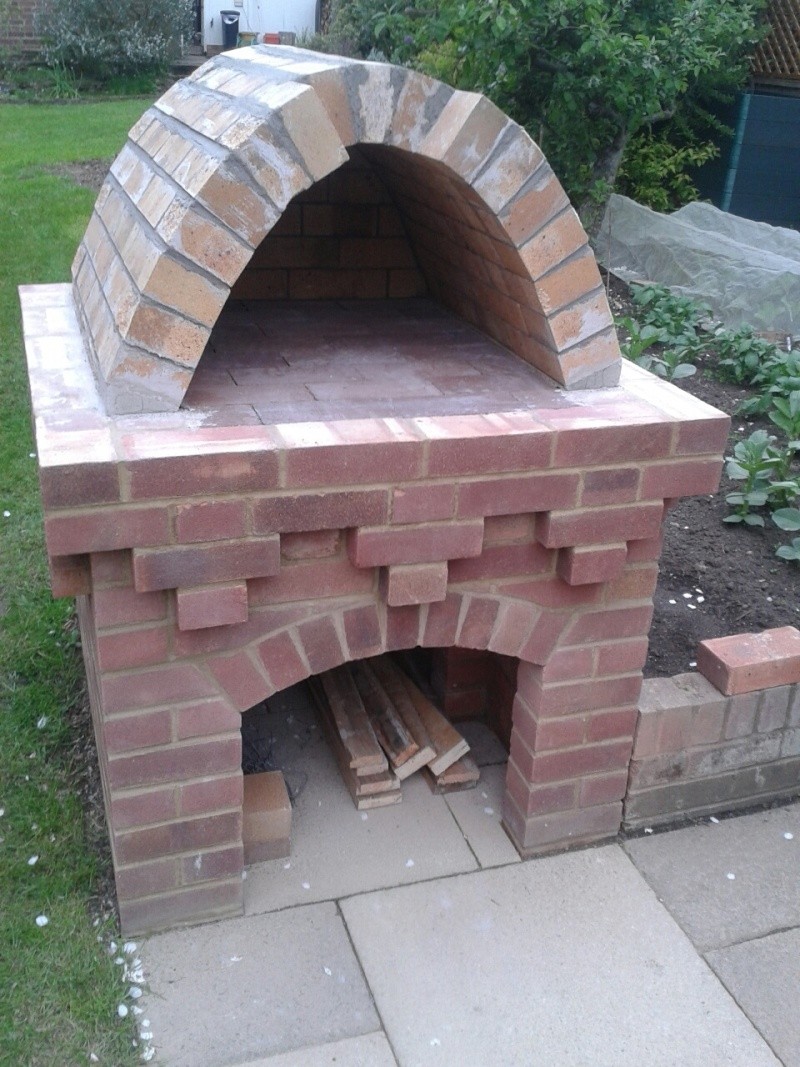 The gap at the top front is for the flue pipe.  That's going to be a bit of re-cycling that I'm particularly proud of. More later !

Reckon it's time to start sending out the invites, CH. Need a good calligrapher..........? 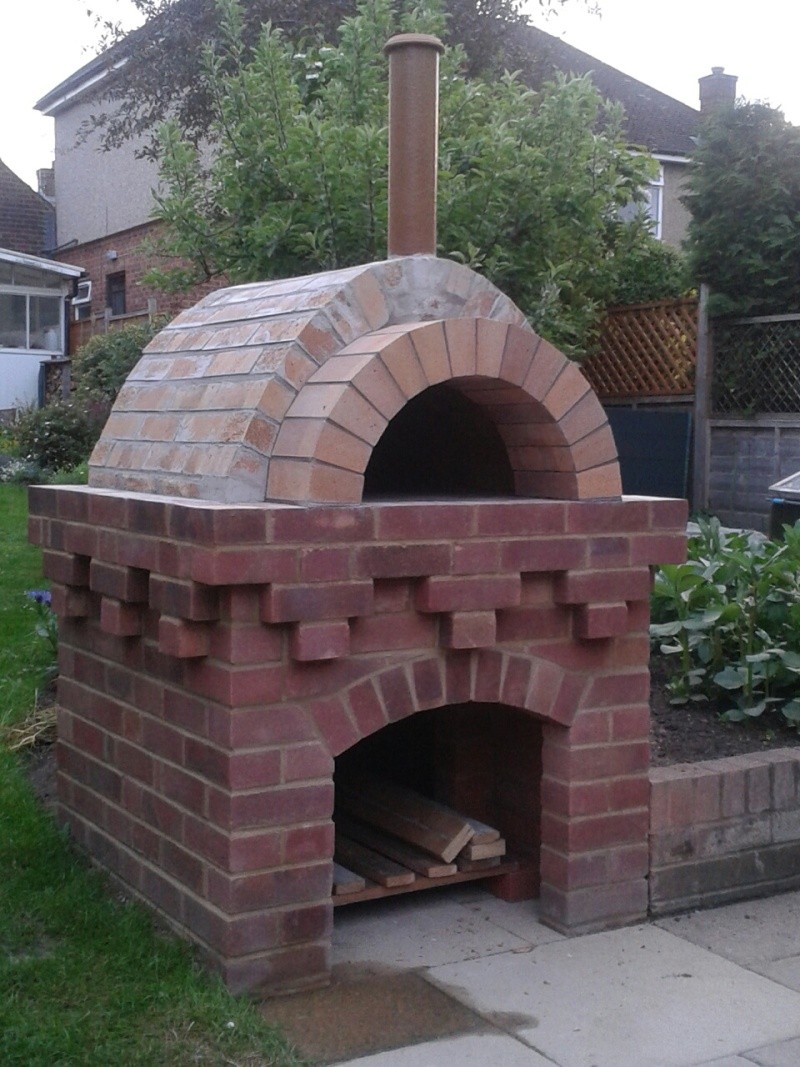 The entrance arch bricks are specials which are already tapered to save cutting.  The flue pipe I'm quite proud of;  I wanted a piece of vitreous glazed clay drainage pipe,  and spent a while pondering on where to find a piece.  Finally I had an inspiration,  and remembered the disused soakaway in the garden behind the kitchen.  15 minutes of excavation later,  and I had what I needed free of charge ! ***

Just a lot of rendering with vermicrete for insulation now, and a coat of more  weather resistant render over that.

*** Edited to add - I have since discovered that this was not one of my better ideas. As it is a fired clay material, I assumed it would withstand the temperatures involved. It didn't. Definitely not one to copy - see later.

Oh, does all that lovely brickwork get covered up then?

It's looking fabulous, it's a pity you can't have a transparent insulating layer so that your lovely brickwork can be seen. In a previous house I lived in I would like to have has a glass panel in the floor because the junction of the copper water pipes was a work of art.

Only the firebrick main body of the oven gets covered up - the front arch and the red brick parts are all left on show.

Any resemblance to tank engines real of fictional is purely coincidental ! (Mrs C-H has been chortling about the steam engine styling a little

- perhaps I should put a face on the door !)

Final coat of render went on last night. My arm aches now ! The was a sand and cement render to keep the water out of the inner layers. They are two layers of vermicrete with a layer of chicken wire between them to help hold it all together if any cracking occurs.

No photo yet - it was too dark for my camera by the time I knocked off. Next stage is a couple of coats of whitewash on the render for the full Greek look, then I think I'll use some left over silicone water repellant on top. The vermiculite render is very insulating, but also very absorbent !

If you're taking pre orders yet, lots of pepperoni on mine please. 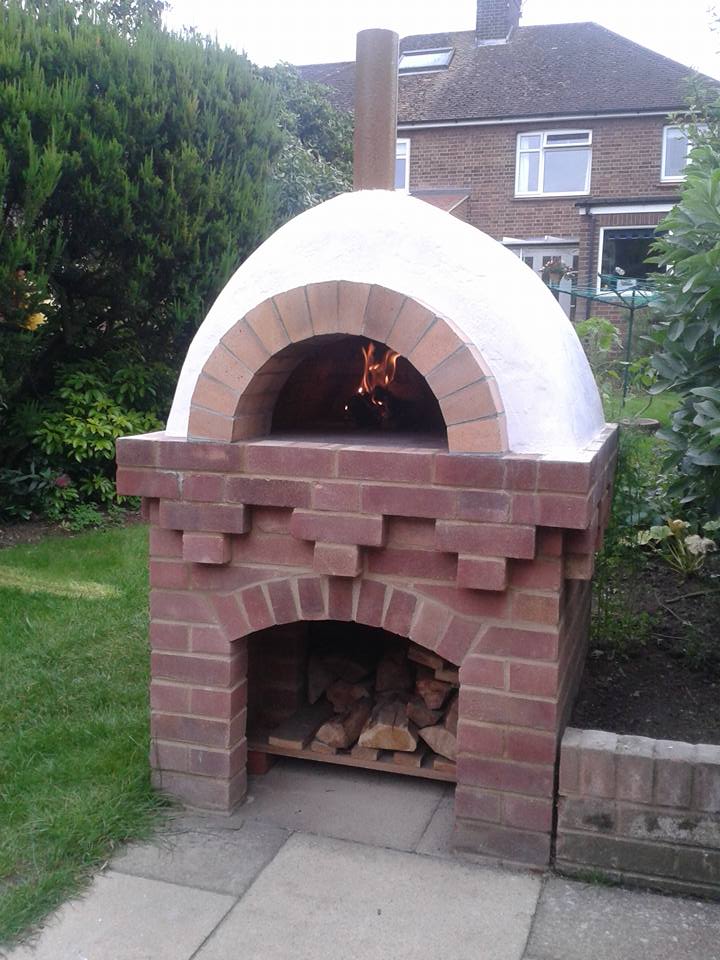 Since I like all things Greek, what else could I do but slop a bucket of whitewash on it ! Hoping it withstands our not so Greek weather.

The first gentle fire to help dry things out fully. It needs a door to keep the heat in for slow cooking yet - I've made a start on that.

Ooooh - exciting to see a fire in it. Looking forward to sampling its maiden voyage. I'll be expecting a bit of pizza in the post.

It looks fantastic, but only to be expected from you. I'm confused now though. I thought the fire box was the bottom bit and the top bit for cooking. Is the fire only in the top bit for drying otherwise I can't see where the pizza will go.

The fire and the pizza go in the same place, the top part. This is how the pizza picks up some good flavours (and probably the odd bit of wood ash and grit, but never mind). The bottom part is just a stand, and log store.

How it works - the oven is built of firebricks, which as well as resisting high temperatures, are much denser than ordinary brick. These make up the floor of the oven (where I used salvaged bricks from a storage heater) and the barrel vault over it. These are insulated to keep the heat in the oven - by the wine bottles below, and the vermiculite in the render over the top. A pretty big fire is lit inside the oven, and burns for a few hours to heat up the bricks. The fire is then swept to the back of the oven to make space to put the pizzas or whatever on the very hot surface to cook. For pizza, it is normal I think to keep a fire burning there at the back, whereas for baking, slow cooking etc it is mostly the residual heat in the bricks that does the cooking.

All of this is theory for me yet, I have only had a couple of small fires yet. I have made the door, which is made from oak backed with the sort of vermiculite board normally used to line woodburning stoves. There was still a bit of warmth in it this morning from last night's fire, which was just 2 ash logs.

Ah, of course, it would be pointless having a fire underneath that heavily insulated floor! When I get a picture in my head I can't see past it. Come to think of it I've seen ashes being raked out to bake bread.
Will you be making your own pizza peel?

After a few trial fires, I want for the big one last night. Which revealed that my idea of the terracotta drainage pipe as a flue was not a great idea. Got to about 250C in the oven when the flue cracked rather spectacularly - I think the differential between the hot flue gasses and the outside air temperature caused too much stress in the relatively thick walled pipe.

Still, with the heat I had built up we managed to cook three pizzas, which came out with a nice crispy base, though I'd like to see the top grilled a little more. We used the resifual heat for a loaf of cinammon and raisin bread - could have done with a bit hotter for the loaf.

So some promise, but a slight modification planned - I'll replace the pipe with a length of enamelled steel stove pipe. Shouldn't be too big a job. I hope.

That's a shame, you were pleased with that bit of recycling. It's amazing just how hot a flue gets. Our wood boiler shows the flue temperature and it shoots up really quickly as soon as the boiler is lit.
As this was your first trial run I won't be expecting a slice of pizza in the post just yet.

Interesting catch-up, CH. Doesn't sound as if too much modification is needed.

New flue fitted today, easier than expected as I was able to break out the remains of the old clay one without disturbing the surrounding brickwork, insulation or even the outer render. I've replaced it with a 4" vitreous enamelled stove pipe - I was able to pop it in the hole, pack around with fibreglass rope (the stuff for stove door seals), then seal round the top with high temperature silicone sealant. The sealant is supposed to remain flexible from -45 to +1200C. Sounds hard to believe, but we will soon find out.

Got a fairly good fire going. I think maybe I could afford to make it a bit bigger ... 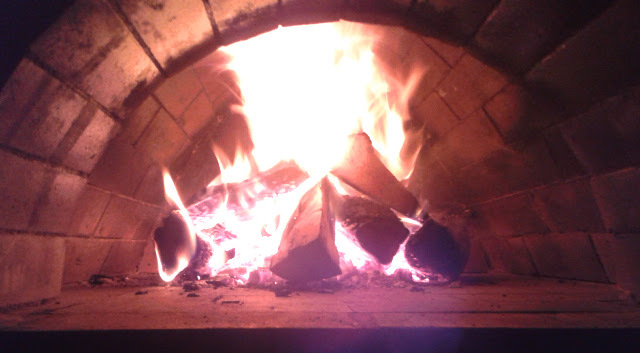 A few hours of heating later, the remaining fire is pushed to the back, and in went a loaf: 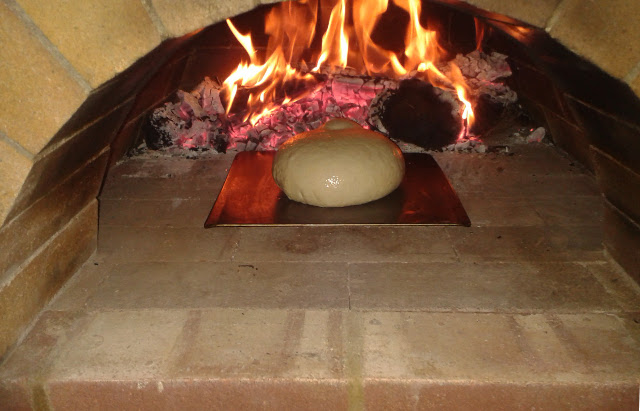 Looking back at it, I can see here what I did wrong.  Too much fire still burning - right sort of fire for grilling a pizza, too hot for bread !  I got an edible loaf, but it had a bit of a black crust on one side, whilst still being a little underbaked in the centre.   I still have a lot to learn about using my oven.   It does consume a lot of wood too - I reckon I got through about what the living room stove would use in three evening burns.  It took about 4 hours to get up to temperature (there's a lot of brick !).  About half an hour after the loaf came out, the fire was a perfect bed of coals which would have made a much better loaf.  The oven was still warm when I checked 18 hours after the last stoking. So to make best use of the fire, I think maybe one burn can do flatbreads, a loaf or two and an overnight casserole afterwards.

Looks as though it's going to take some goes to get the measure of it. I suppose they're best when used daily so the heat is never completely lost. That's how we operate our underfloor heating - leave it on 24/7 and light the boiler before the water temperature gets too low. That way it uses least wood. I like the sound of being able to slow cook a casserole in there.

Decided to have a play and fire up the beast this afternoon.  My pear wood has been drying for two years in the storage space under the oven, so nicely dry.  It took quite a bit less to get the oven up to cooking temperature - about 2 1/2 hours burning. 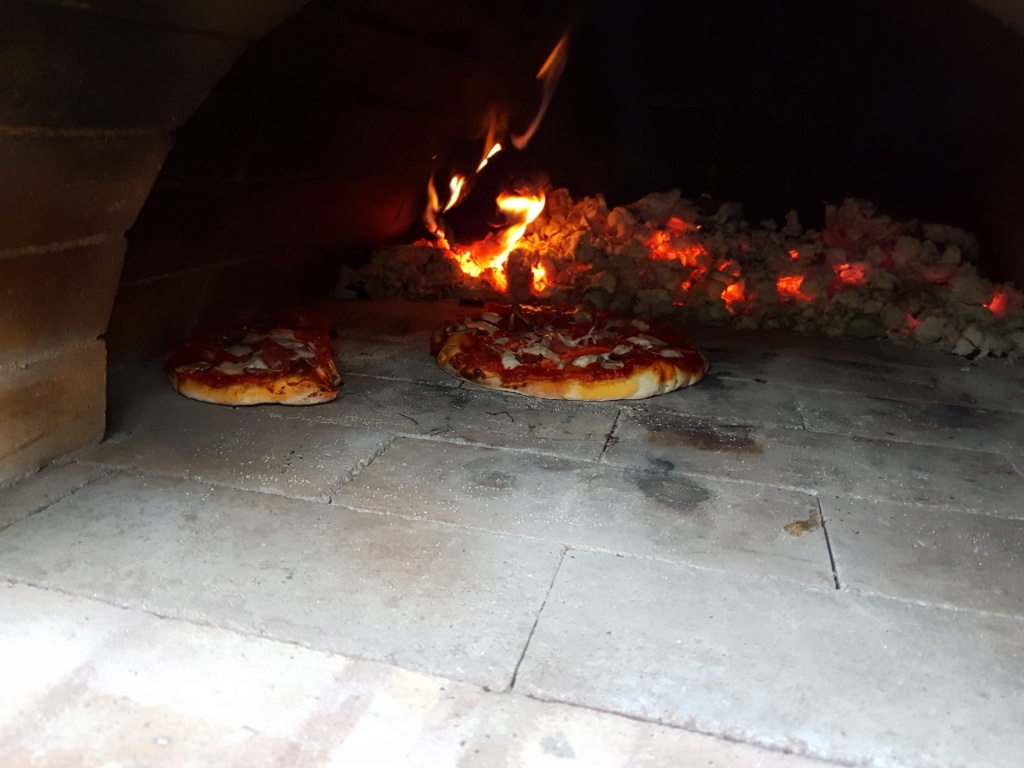 The result.  I think I'm starting to learn how to use this.  Getting the heat right, and using the right part of the oven to get a crispy base and the toppings cooked well.  Some if my homegrown pepper on this one too : 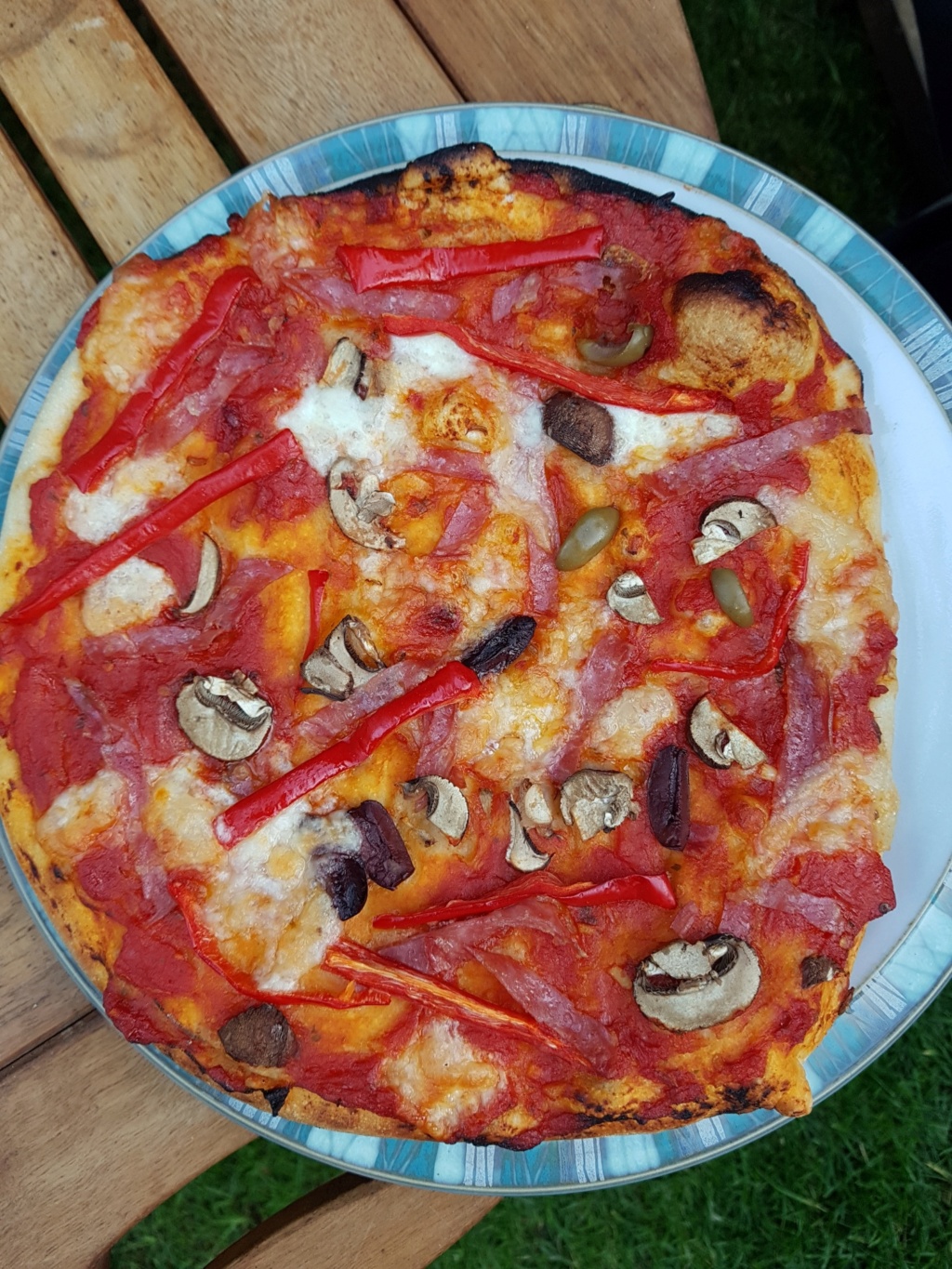 Getting much more pleasing results now.  And the smell

We finished with a loaf of olive bread for tommorow's lunch.

Ooh, Chilli Head, that looks so tasty I can almost smell it from here.

A slice for me, please. I suppose it's too soon to have a glass of Château C-H with it ;-)

That looks good, CH. Pizza by post maybe? If I can be first in the queue.

A Homemade Life :: The Home and Family :: We love wood.