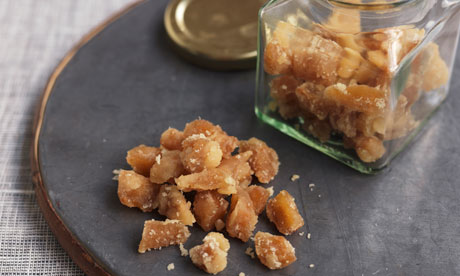 Some cooks insist that tender young ginger is the best to candy. Nonsense. In my view, young ginger is highly overrated, because there's nothing like the older stuff to add bite and vigour. Like people, really. Yes, we all get a bit stringy and tough as we age, but if you want character, we're loaded with it.

1 Freeze the ginger for around a day or so, if you have time, as this breaks down the fibres slightly and makes it easier to cook. Peel the stems by rubbing the skin off with a blunt knife, which is easier than using a peeler, then cut the ginger into 2cm chunks.

2 Boil the ginger for an hour, barely covered with water (top it up from time to time) until it pierces easily with a knife. Then add 100g sugar, simmer for 10 minutes then remove from the heat and leave to cool for a few hours.

3 Repeat with another 100g sugar, then the final 100g, then return to the boil and simmer until the sugar is a thick syrup around the ginger. Add the honey, boil again until the syrup is thick, then bottle while hot in sterilised jars with clean screw-top lids. Seal and allow to cool before using. It might crystallise with sugar in the jar, but don't worry. Chop or slice it finely before use.