I have grown more chillies than I can eat !  Time to make hot sauce.  This recipe is a modification of one by Rick Bayless, but the ingredients are a pretty common selection.  My changes are to replace the original Orange Habanero chillies with Paper lantern, another Capsicum Chinense, and to replace some of the vinegar content with lime juice.  The aim is to reduce the vinegar taste of the sauce which I don't favour, but instead to maximise the fruity flavour which is the sheer pleasure of the nicest Chinense chillies. 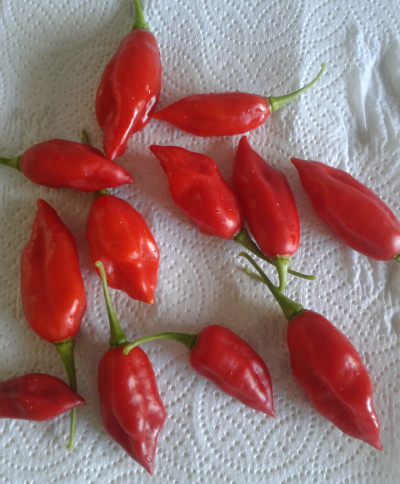 Heat a heavy pan over a medium heat, and place the garlic cloves in it.  Dry roast, turning, until the skin begins to blacken where it has been touching the pan - about 10 mins.  Peel the garlic and put it in a blender.

Put the water, vinegar, onion, carrot and the chillies in a small pan.  No need to chop the chillies ( safer for the hands

), just pull off the stalks.  Simmer for 10 minutes partly covered to cook the carrot, then leave to cool a little - this is to avoid a blender explosion !

Add the contents of the pan to the blender, and the juice of the limes, salt and sugar.  Blend until completely smooth.  Place in clean jars (I sterilised mine in the oven, but that might be overcautions).  Leave to cool then refrigerate.  It should keep for some months in the fridge.  But it won't in my house !

I got three small jars full like so, and a part filled larger jar (ran out of pretty jars !)